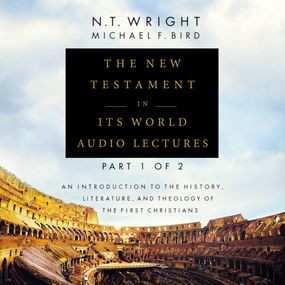 Title: New Testament in Its World: Audio Lectures, Part 1 of 2

The Zondervan Biblical and Theological Lectures series provides a unique audio learning experience. Unlike a traditional audiobook's direct narration of a book's text, The New Testament in Its World: Audio Lectures includes high quality live-recordings of college-level lectures that cover the important points from each subject as well as relevant material from other sources.

This part 1 includes these lectures:

Intro to the Course

Michael F. Bird is Academic Dean and lecturer in theology at Ridley College in Melbourne, Australia. He is the author of Jesus and the Origins of the Gentile Mission, The Saving Righteousness of God, Evangelical Theology, Romans (Story of God Bible Commentary Series), The Gospel of the Lord: How the Early Church Wrote the Story of Jesus, and editor of The Apostle Paul: Four Views.
ISBN: 9780310101819