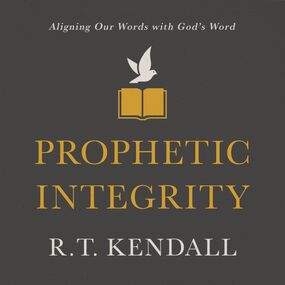 What happens when prophets are wrong?

In 2020, many Christians claiming to be prophets said God told them that Donald Trump would be re-elected as president. Over thirty years before that, one the famous Kansas City Prophets, Paul Cain, prophesied that there would be a revival in London in 1990, which never came to pass. These examples make us wonder:

In recent years, misjudgments among Charismatic Christians claiming to speak for God as well as moral failures within Evangelicalism have resulted in a crisis of belief. In Prophetic Integrity, bestselling author and speaker, R.T. Kendall gives a warning to those speaking in God's name and offers a way forward in trusting God despite the failures of the church.

To unpack this difficult topic, Kendall, a self-described "Reformed charismatic," relates accounts of visions and supernatural experiences and shares stories and thoughts about Christian leaders that he knew personally, such as Paul Cain and Ravi Zacharias. He gives examples of good and bad prophecies and teaches a biblical and theologically-sound understanding of prophetic gifting and use.

Prophetic Integrity is a book for those who believe that God still speaks today but have serious questions about those within the church that identify as prophets. It's a call for honesty, vulnerability, and repentance; and it speaks to Christians of many different traditions, including Charismatic and Evangelical.

Discerning Christians of many different traditions can and must take both God's word and the gift of prophecy seriously and recognize how humans can abuse such gifts or use them to advance God's Kingdom.