No Pressure, Mr. President! The Power Of True Belief In A Time Of Crisis by Eric Metaxas... for the Olive Tree Bible App on iPad, iPhone, Android, Kindle Fire, Mac, and Windows - Olive Tree Bible Software

No Pressure, Mr. President! The Power Of True Belief In A Time Of Crisis 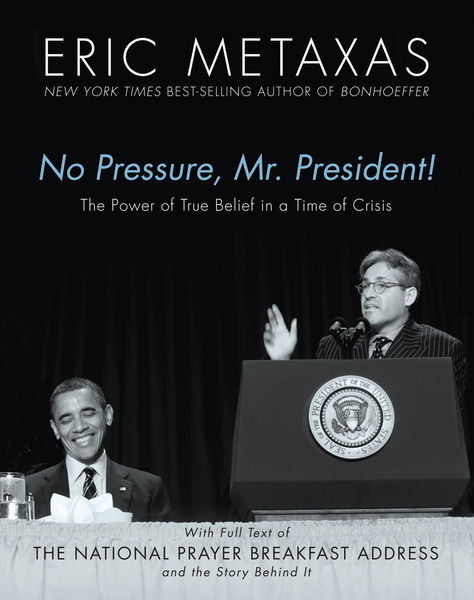 No Pressure, Mr. President! The Power Of True Belief In A Time Of Crisis

Title: No Pressure, Mr. President! The Power Of True Belief In A Time Of Crisis

There is a difference between real faith in God and mere religion. There is a kind of religion that is lifeless and is the bitter enemy of true faith. Think of Dietrich Bonhoeffer’s prophetic attempts to waken the sleeping German church, often unwitting allies of Hitler and the Third Reich. Or of William Wilberforce’s heroic efforts to rouse his complacent “Christian” countrymen to stand against the monstrous evil of the slave trade. Bonhoeffer and Wilberforce stood against the evil of their times—an evil often repackaged in religious-sounding language.

Eric Metaxas’s electrifying message—delivered before the president and dozens of national leaders at the Sixtieth Annual National Prayer Breakfast—calls readers to follow in the steps of Wilberforce and Bonhoeffer, men who lived their faith and swam against the mainstream, instead of drifting along with it. Metaxas makes it clear that phony religiosity offends God himself—and that real prayer is only possible with a living faith in a living God. And that kind of faith can transform the world. No pressure.