Shocked by the Bible: The Most Astonishing Facts You've Never Been Told - Olive Tree Bible Software

Shocked by the Bible: The Most Astonishing Facts You've Never Been Told 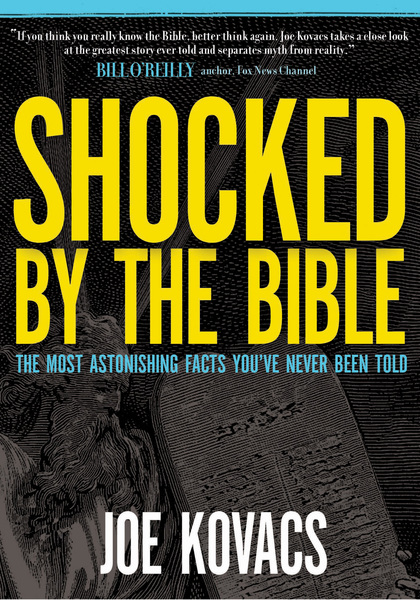 Shocked by the Bible: The Most Astonishing Facts You've Never Been Told

Title: Shocked by the Bible: The Most Astonishing Facts You've Never Been Told

Shocked by the Bible sets the record straight with well-researched, controversial, myth-breaking assertions about what the Bible really does—and doesn’t—say.

And guess on which day the Bible says Jesus died. Believe it or not, the Good Book doesn't mention Friday, and even more surprisingly, while the Bible says Jesus rose from the grave, it does not say it occurred Sunday morning. Remember, Jesus' followers found an empty tomb then.

But don't feel bad if you've always assumed otherwise. Like countless millions of people, you've just been misinformed, misled or even (dare we say) lied to about what the Bible actually says.

In a stunning investigation, news veteran Joe Kovacs goes on a mission to help both Christians and non-Christians alike find out what the Bible really contains, and what it doesn't.

"Shocked by the Bible: The Most Astonishing Facts You've Never Been Told" is an educational juggernaut that relies solely on the Holy Bible to reveal hundreds of Scriptural facts that many people of all persuasions simply don't know. The book instantly skyrocketed to the No. 1 position in three Bible-related categories on Amazon.com.

"I'm among the biggest fans of the Bible of all time," says Kovacs. "My goal is to educate people about the solid truth of Scripture and to stop the spread of erroneous information. I want people to crack open their Bibles and see with their own eyes what's actually printed on the pages, and what's not. It's shocking!"

According to Scripture, you won't find "Three Wise Men" mentioned anywhere in the story of Jesus' birth. For that matter, none are said to have shown up at the manger in Bethlehem. The truth straight from your own Bible is that an unspecified number of wise men first met Jesus as a "young child" in a "house," not a babe in a manger, and it might have been more than a year after He was born. Go ahead, look it up for yourself.

Also, according to Scripture, you won't find a single mention of Easter eggs, but you will find God warning His people not to have anything to do with a pagan fertility goddess, whose name is synonymous with "Easter."

"Yes, I'm a Bible-believing Christian," says Kovacs. "But I'm not here to convert anyone. People are free to believe whatever they wish and can come to their own conclusions. I just want to show them the biblical record is often very different from what many assume. Not only will Christians love this book, but I think Jews, Muslims and even agnostics and atheists will get a kick out of it as well."